Reviewed On: Xbox One X

Gears 5 was touted as “the biggest and most ambitious game in the history of the franchise”. With the quality of gameplay and storytelling that was achieved in the original trilogy, it is safe to say that it is a very bold claim. Does Gears 5 live up to the hype? Let’s talk about it. 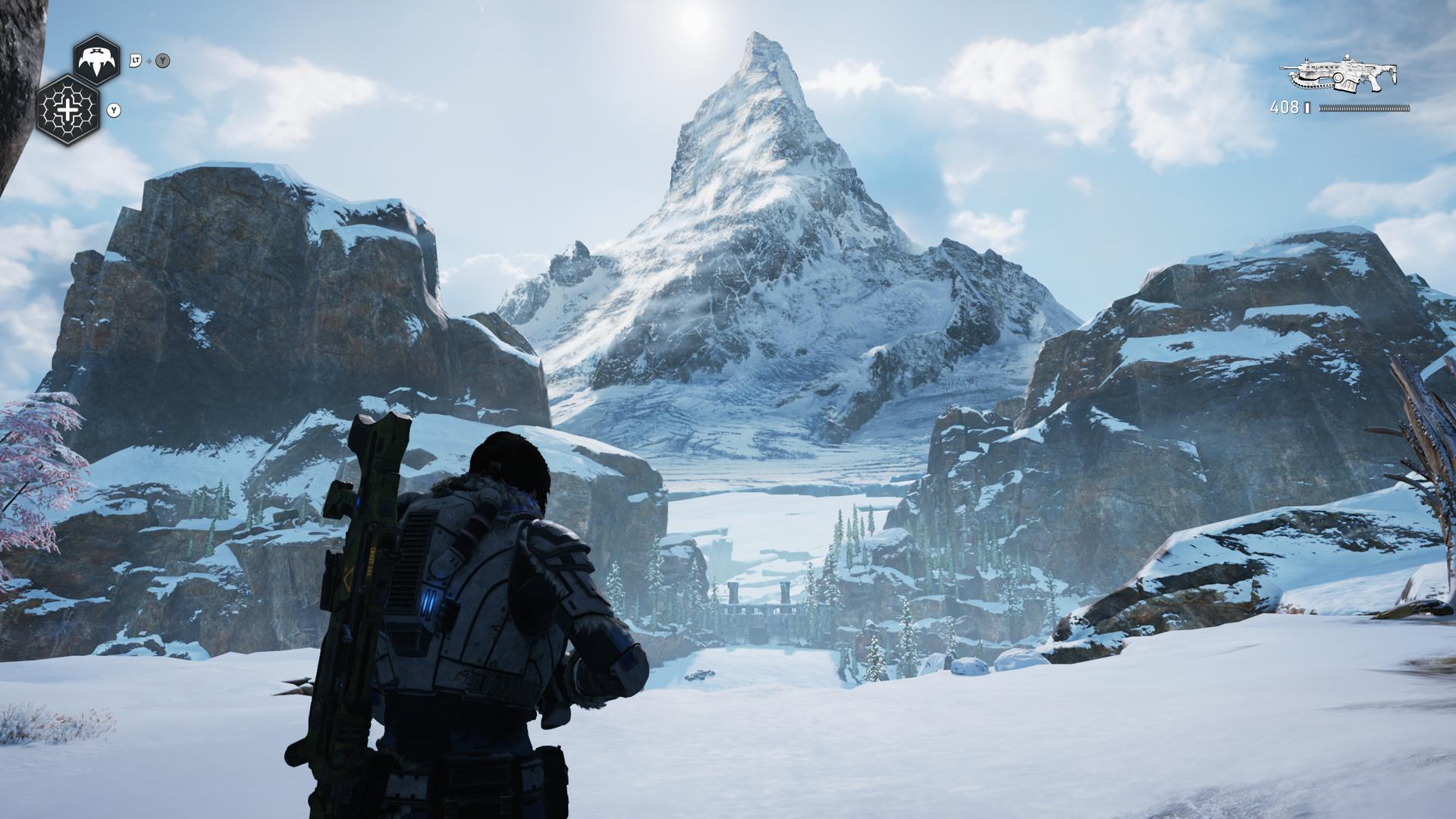 Gears 5 is a visual testament to the knowledge and understanding that the Coalition has of Unreal Engine 4. Gears 5 was a visual showcase especially on Xbox One X, the game wasted no time impressing me. The contrast of the ice biome in Act 2 and the desert biome in Act 3 acted as major changes in colors and were filled with massive set pieces. Compared to some of the previous games, the wide use of color made for some very beautiful moments. With the increased scale of the world it makes the fact the game runs at 60fps all the more sweeter. The gameplay feels smooth as butter, having stunning visuals while also achieving 60fps on the Xbox One X is definitely an accomplishment. The game feels like such a massive step up from Gears of War 4, in terms of visual fidelity it’s hard to believe that they are only 3 years apart. 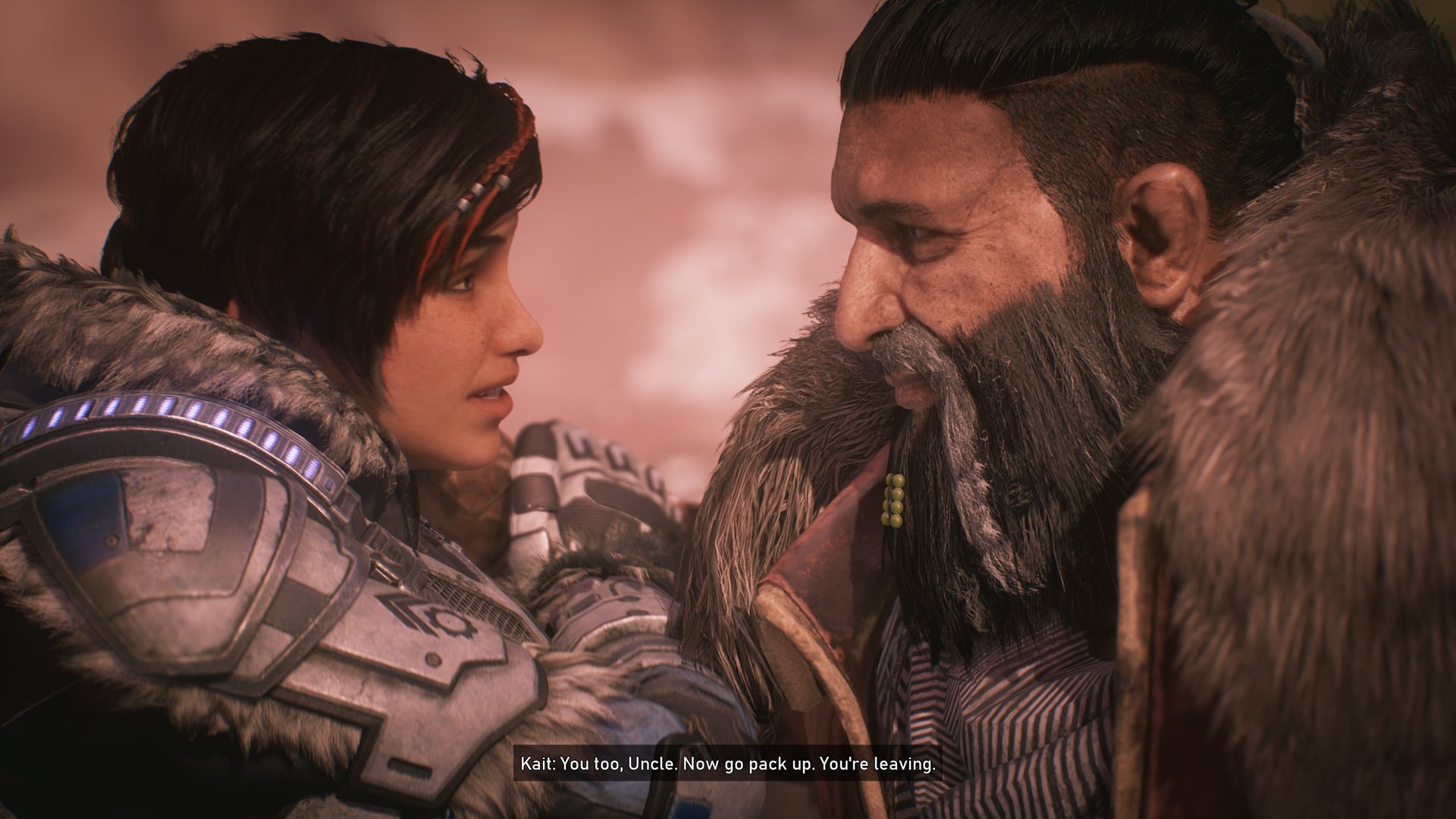 The gameplay historically has always been a strong point in the Gears franchise. This has continued with Gears 5 in the best way possible. Movement feels much smoother and less blocky in terms of cover. One of my largest complaints with third-person shooters is often how “sticky” the cover system feels. However, in Gears 5 transition cover has never felt this easy, with smooth animations that look more natural than in previous games. While the gunplay has always been tight in Gears, the melee combat I have always felt fell short in comparison. The Coalition addressed this, not only with improving the damage scaling and the smoothness of the melee combat. The addition of the brutal breaker mace created a whole different level to the combat. Mowing through piles of enemies and turning them into tiny little grub pieces was some of the best parts of the campaign. On the flip side of this as well, are the wardens who wield these weapons are intimidating foes. Running backward and firing for your life as a warden charges you with two breaker maces can be some of the most intense combat sequences especially on the higher difficulties.

Now let’s talk about the types of enemies you face within the Gears 5 campaign. One of the largest criticisms of Gears of War 4 was at the start of the game when you had to spend a solid few hours cutting down endless waves of robot enemies. Gears at its core has always been about exploding fleshy enemies into a bloody mess, and these enemies counteract this heavily. However, while you still have to deal with DeeBee’s they were brought back with an interesting twist. The Swarm have leeches that travel in flocks that can hijack friendly DeeBee’s and turn them into “Rejects”. These rejects lurch around with murderous intent, with bloated leeches bulging out of their robot frames. At one particular level when first introducing the rejects to the player the level had an almost Dead Space style vibe. With a mixture of old school enemies and a handful of new and terrifying enemies, it provides a great balance for new and old fans. 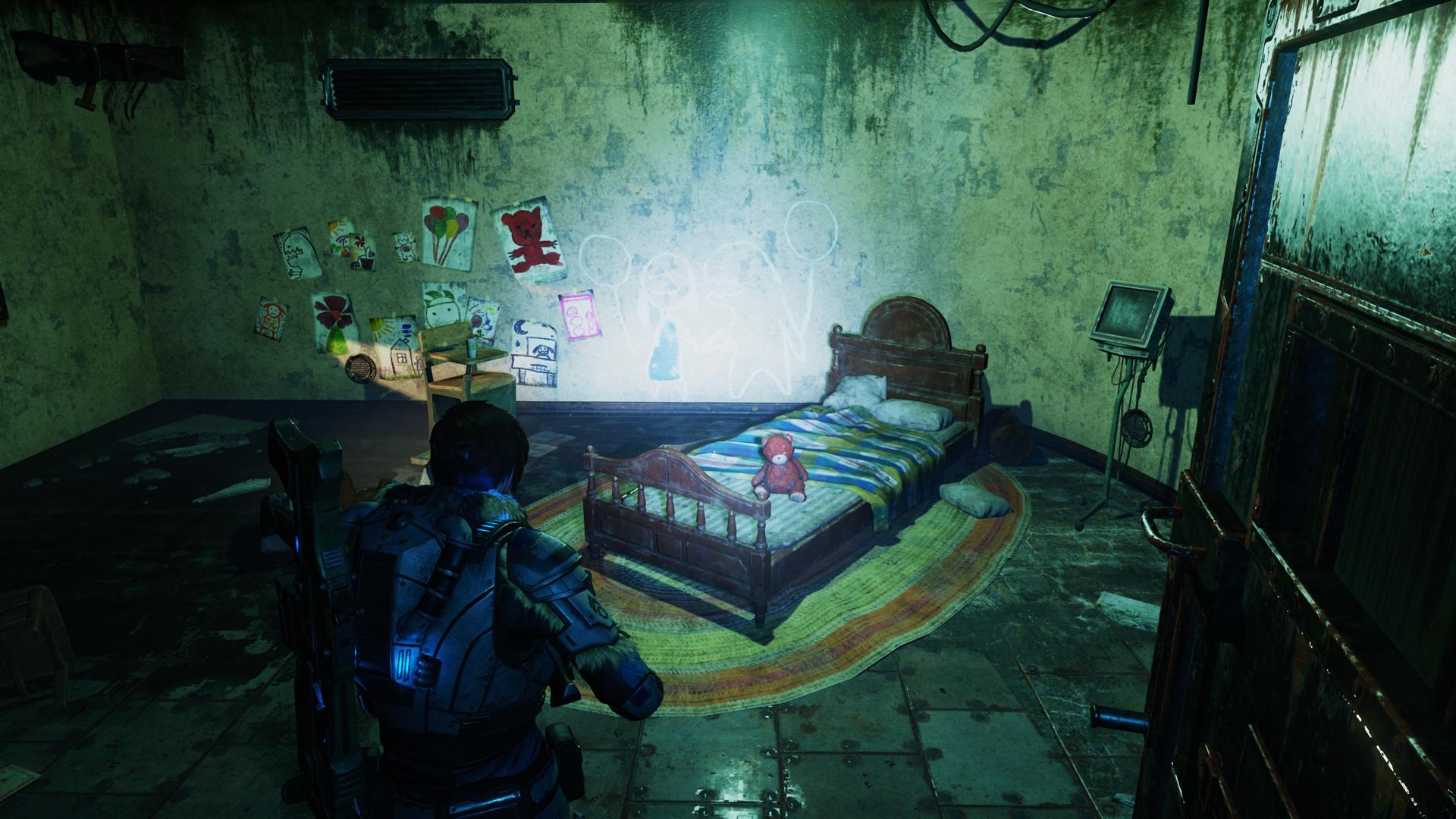 In its previous installment Gears of War 4, the story felt very safe compared to the other games in the franchise. JD was a very average and even borderline a bland protagonist, and Kait and Del felt like they were just tagging along for the ride. However, this changed very drastically very early on in Gears 5. JD went from a blank generic character to being a morally deep and conflicted man. Who constantly internally battled between his duty and his friends. Kait and Del are the main focus of the story, and their friendship and banter make a perfect balance. Even old man Marcus returned but in a way that supported the growth of the other characters. Instead of feeling like a quick tie into the older games, he played a more supportive role.

The overall story pacing was great, the use of the semi-open world elements to encourage players to explore the various locations in the game for upgrades and collectibles. The collectibles helped provide more insight into background lore and I found myself intentionally seeking these items out to immerse myself more in the story. The tie ins with the older Gears games were fantastically well done. Fans got answers to questions that were left open in Gears of War 2 & 3. Learning the history of the Swarm, and how they were growing in power. Was one of the highest points in the story, which also included one of the best boss fights the series has ever had.

The most stand out aspect of the overall sound design in Gears 5 is the phenomenal soundtrack. Which during combat enhances the direness of certain enemy encounters, and during emotional peaks, the music just takes it to that next level. Enemies screams and calls can cause instant panic. There is nothing more intense than being low on ammo on Insane difficulty and hearing a juvie scream signaling the onslaught of a horde. Then, of course, last but not least, the gore sound effects and sound design around headshots were nothing short of perfect. With almost every gun being able to explode heads, there was nothing more satisfying than popping Swarm drone heads with a Boltok pistol.

Gears 5 is a massive step forward for the franchise, and truly elevates The Coalition to the next level. The game is an absolute must-play, whether a long time fan of the franchise or a newcomer. I truly believe Gears 5 should be in the conversation for game of the year 2019.

FIGHTING GAMES RETURNING BIG TIME: GOT TO PREVIEW THE KING OF FIGHTERS XV